December 1, 2012 By Luca Gaetano in The Tweeds Leave a comment

About 1830, a London merchant received a letter from a Hawick firm about some tweels. The London merchant misinterpreted the handwriting, understanding it to be a trade-name taken from the river Tweed that flows through the Scottish Borders textile area. Subsequently the goods were advertised as Tweed, and the name has remained ever since. 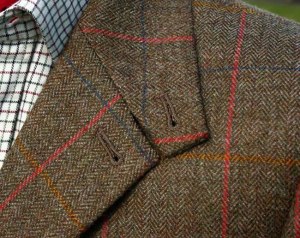 Traditionally used for upper class country-clothing like shooting jackets, tweed became popular among the middle classes who associated it with the leisurely pursuits of the elite. Due to their durability tweed Norfolk jackets and plus-fours were a popular choice for hunters, cyclists, golfers and early motorists, hence Kenneth Grahame’s depiction of Mr Toad in a Harris tweed suit.